As per our “Plan of Attack” – This Series will investigate Soil via the plan laid out in Episode 1.

Episode 2 will outline the high level investigation into the Components of Soil and the impact of these on the Soil properties.  Episode 2.2 will focus on the Organic Matter “piece of the soil component pie” covering the key concepts of the Soil Food Web. 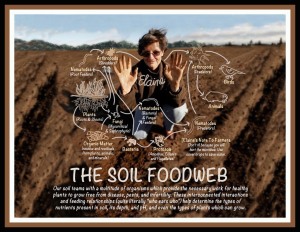 THE COMPONENTS OF SOIL –

Soils are composed of weathered minerals, organic matter, living organisms and pore spaces. The ratio of the components are generically indicated as:  (Source)

Obviously the ratio will depend not only on where you are in the world, but also the historical treatment of your soil – by humans, by climate, by time.  However it is as good a diagram as any from which to start dissecting soil components (and a good picture for your mind’s eye).

Before I continue this series I need to add an apology to all the other soil lovers out there.  While we’re dissecting soil into to its components (much like assessing each component of a person to find out how things work), when we put all the components back together again,  we will not necessarily make a living, breathing soil ecosystem (much like putting all the pieces of a person together will not make a living breathing person – no matter how much lightning you apply!).

Beyond (and within the basic components) there are far bigger, more complicated relationships which facilitate/propogate life.  Hopefully this will become clearer as we look at the properties of soil in future blogs.  These future blogs will drill down deeper into each component and especially focus on those sub-components which impact (and/or are impacted by) multiple “pieces of Soil Composition pie”.

Additionally, it is essential to note that there are highly simplistic steps we can take to resuscitate the soil (SR for those in the know, Soil Resuscitation for everyone else!).  These steps definitely do not require such an in-depth knowledge and should therefore not be overlooked/shied-away from just because of all this complicated stuff.

But for the time being, us novices will continue the dissection….. so we can catch a glimpse of the importance of respecting our soil and an understand of why the things we do can have such a vast array of implications.  Please forgive me.

It is said that “Soils are home to over one fourth of all living species on earth, and one teaspoon of garden soil may contain thousands of species, millions of individuals, and a hundred metres of fungal networks.”  (Source)  However experience has shown that, with extensive human effort and some chemical based farming practices, it can also contain none at all!

The relationship between the variety of organisms existing within, or in contact with, the soil has been described by the Soil Food Web.  (Original Source of all things Food Web) The Soil Food Web attempts to provide a picture of energy movement between the species.  Perhaps the food chain, whilst only one such path, is the one we are most familiar with (as soil novices) and therefore the simplest to start with.

Who eats who or what – from plants “eating” sunlight and CO2, to birds eating worms, nutrients are transferred through the system.  Plants, called Autotrophs due to their ability to make their own energy, kick off the food web providing the Heterotrophs, who cannot make their own energy, with food to survive.

This particular picture outlines the energy traveling up the trophic levels (swish name for their position in the food chain) – i.e. as the organism increase in size or change from plants to herbivores to higher level predators.

The Trophic Levels above that of plants can also be pictured / labelled as per below: (European example – Picture Source)

(As a potentially irrelevant aside – there are 5 “Kingdoms” on this beautiful planet of ours and, as the highest ranked classification means, all life is split into: (Very simple Source – the BBC!)

As I say, irrelevant really for this context, but, when trying to get my flora and fauna lingo right – as I am sure someone will pick me up on it one day -, I could not figure out what bacteria was!  But I digress)

It is critical to note that, although the food chain appears to go from left to right as it were, there are underlying critical currents traveling the paths back the other way or, in many respects, cycling through the system.

These currents are typically defined by physical or chemical (nutrient) paths which are usually at the mercy of the life forms existing within the soil.  There appears to be an infinite number of ways to group the organisms and micro-organisms within the soil, but one that struck a cord with me was the method employed in the   Biodiversity Report documents for the European Commission in 2010.  They divided the microorganisms and organisms into (a) chemical engineers, (b) biological regulators or (c) ecosystem engineers. Bear in mind though, that many are involved in two or even three of these roles.

(I’ll use a little poetic license to miss quote them so the groupings make more sense to me….. However feel free to review their report to get the facts and find your own grouping)

(a) Chemical Engineers – (e.g. the bacteria, fungi and protozoans (broadly, but not exactly Kingdoms 3 -5 as mentioned above – ha ha, not so irrelevant now!) – decomposes organic matter (mainly plantae and animalia, but also microorganisms) into nutrients in a suitable form for plants and animals to utilise them.

(b) Biological Regulators – (defined as the small invertebrates – e.g. nematodes, mites etc)  With respect to soil, these guys act as predators/eating machines, which devour their way through: (Source: Teaming with Microbes – The Organic Gardener’s Guide to the SOil Food Web, Lowenfels, J and Lewis, W, 2011)

Hence they efficiently regulate populations both across an area and over time.  Nematodes for example (and which will form a huge discussion all on their own), are picky eaters.  Depending on their type and hence culinary delight (be it good or bad for the soil as a whole) they will breed up on the basis of supply and demand – the more food the greater the numbers of nematodes, the less food then the population starves and shrinks.  Similarly their population is dependent on that of their predators. Information on the type of nematode, its function in the soil and its food source, enables an understanding of the way to influence its impact.

(c) Ecosystem Engineers – (e.g. Earthworms, ants, and other “Animalia” kingdom life) modify or create habitats in the soil by changing its structure – clumping and compaction versus creating holes/pores.  These different environments present ideal conditions for very different types of microbial activity as well as delivering additional resources (manure/castings/dead bodies) to locations within the soil – when typically us humans can only add to the top layer.  Increased holes leads to a greater air holding capacity which supports the organisms suited to those conditions, but also greater water holding potential.

Whilst the Soil Food Web contains the section marked “organic matter” described as waste, residue and metabolites from plants animals and microbes, I have taken the liberty of adding some information to make the return trip of nutrients to the plant a bit clearer to me.  (I hope this does not offend some viewers!)  I inserted an arrow from the organic matter back to the plant which should clinically go via our “chemical engineers” but I think that would confuse rather than simplify the picture.  Plus I have clarified this path by expanding the section at the bottom to show the route (excuse the pun) back from the higher trophic levels.  A population management arrow has just been added for completeness to remind us of our regulators.

So the Soil Food Web – for dummies – could look like: (adapted from Picture Source). 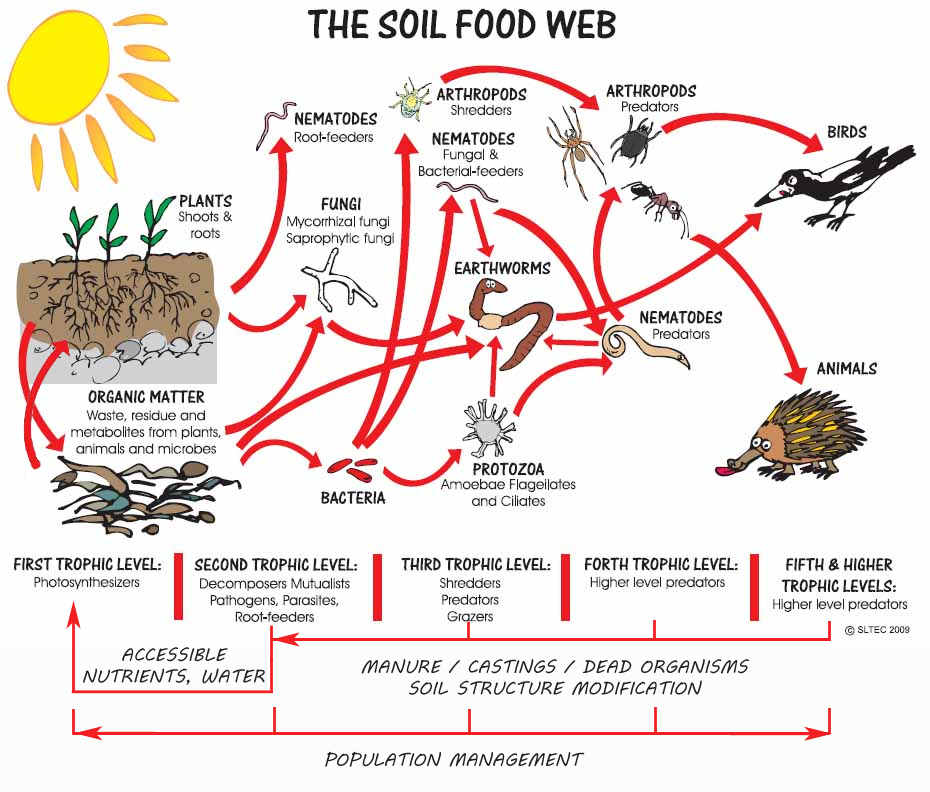 Another way to look at the food web is in a cyclical fashion, as mentioned previously, by following the individual nutrients through the web. Here is another huge topic, but at the highest level, let’s jump to my favourite topic as an example, which is carbon.  The simplified path might look something like….

(Adapted from Picture Source; Elements of the Nature and Properties of Soils, Brady, N.C. and Weil, R.R., 2004; and the Soil Hugger herself!).

The Soil Food Web from a permaculture perspective:  It is the understanding of the interactions between all components – living and dead, animate and inanimate – which is critical to the sustained, low human input, productivity of the system, and which works with the interaction of the components rather than against it.  It is critical, when attempting to artificially boost one aspect of the web, not to do so without understanding (or at least observing to enable learning of) the balancing effect on the other components. Is it a positive for the system as a whole?  Does it add life or is it an energy source for life?

We’ll attack all this in a heap more detail in future blogs as there are so many warrens to descend down (and its bloody amazing!!!!).  Next stop a summary of the soil properties with reference back to what we already have learnt….